Big news, there's a new version of Makerware out. When I decided to adopt Makerware as much as possible I've only found a few little issues. Just last week I found another one, a model that sliced really strange even tho it looked fine in the software. So I've got a lot of tests to run.

The first thing I noticed is that filament diameter is still not editable without editing a text file. No profile editor UI yet either. So that's strike 1 and 2.

But there are some new options concerning dual extruders and support materials. Those will be fun to play with. However, now that I'm using GCode temp override half of that doesn't matter. But the new stuff about generating good paths with the end of sacrificial towers I'm excited to play with.

Then I noticed that opening a new file opens a whole new program window, which is annoying for me because I have 2 monitors and for some reason it wanted to open them on the wrong one my entire session. I got in the habit of using open because I didn't like how the new option used to do this if I wanted to clear the scene to slice another print. So kudos for being consistent, I guess. Too bad they chose the wrong constancy. (Note, I'd rather just clear the current scene than open a new window, if I wasn't being clear.)

Well, at least their fancy new preview mode will allow me to... uh.. where's that fancy new preview mode? There's no button, no menu item. Turns out you have to check the "Preview before printing" button, even if you're exporting to a file, before you hit the Export button in the Make menu. If you fail to do this you do not get the option later without re-slicing the model. But once I found it it was enough to tell me that Makerware is still choking to death on the Guy Fawkes pin, so thanks for saving me that trouble. In fact this preview has helped me find and predit problems in 3 other files in my explorations, so while Makerware still can't slice worth a darn, at least it'll warn you before you print. 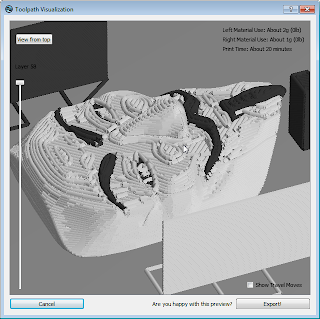 Print estimates info is nice, too. I think I'm going to leave this on all the time.

I like the sacrificial walls they've added to dual prints. It would be nice to turn those on whenever I wanted for narrow prints so I could say goodbye to the sacrifical tower.

To sum up:
The good:


Welp, I'm off to write an e-mail to Makerbot suggestions.
Posted by 3dpprofessor at 12:08 PM