Building a sacrificial tower to fix your prints.

DutchMogul has done it again. I'm loving printing his latest board game, Breach. But I ran into a problem with the Star Goddess that I've seen before with ABS when narrow layers printed in isolation melt together. It's even more pronounced when I print the handle for my soap stamps. It doesn't happen if there's something else the same height printing with it. So printing 2 copies will often fix the problem.

When asking Joe Sadusk about it he suggested it was the time spend on each layer or number of shells, since I was printing with just 1. So I thought I'd do a little experiment and see what I can see. I tried different shells and different minimum layer times. The results were mostly the same, changing minimum layer times didn't fix a thing, adding shells only fixed a little.

At this point I'm thinking the problem isn't the minimum layer time, it's that the hot end never leaves the area and lets the ABS cool a bit. Sadusk said they'd tried it one time but it left droolies on the print, which I can imagine. Having a nozzle idle does cause it to drool. Unless you had a brush to clean the print head on before printing, which the Makerbot does not, that drool would just be stuck to the print. However, I thought of a workaround, a sacrificial tower printed on the build plate. I'd employed something similar before, so I thought I'd give it a try this time. 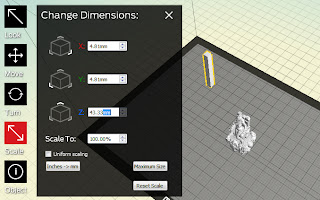 I was impressed that in Makerware I was able to add a 20mm test cube from the menu then scale it non-uniformly to make it as tall as the piece but thin so it doesn't waste much plastic.

The result, the print on the right, was the best of the lot. You can see the sacrificial pillar there too, it kinda detached and if it weren't for the anchor would have been useless, but the anchor kept it in the general area where it could serve as a sort of brush while the layer cooled. This is a filthy workaround, but it works for now. The real solution in my opinion would be if the bot were equipt with a brush and the minimum layer time didn't slow down the print but instead moved the nozzle away for any extra time. But until then I think I'll keep the sacrificial tower in mind.
Posted by 3dpprofessor at 10:33 AM