Thingiverse user Studiokubuz recently uploaded a Printable Dial Indicator and I just had to try it out. A 3D printed machine with a 3D printed spring and 3D printed gears? Yes please. Unfortunately in the end it looks the part, but doesn't really work at all, but it still has a lot of potential. 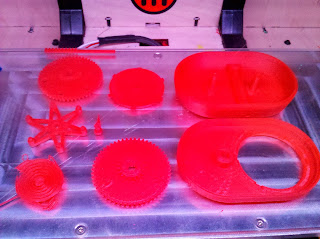 The first hurdle to overcome was the spring. The original was made for PLA, but in ABS it just doesn't want to stick that thin for that long. So I made a comment on the original thing and went about edting my own in Blender. Studiokubuz has apparently uploaded his own as well, so either way. 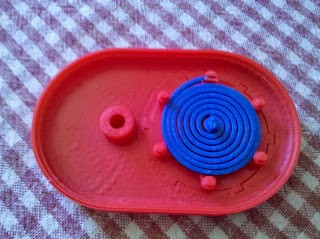 I was impress at how well everything fit together. A little snug, but that just means it isn't going anywhere. The 3D printed spring in ABS doesn't provide quite as much spring back as I'd expect, and I'd love to know if it can generate enough power to push the whole system. 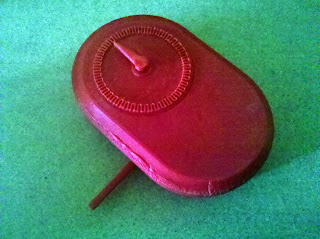 Unfortunately when everything gets together there is too much friction between the gears.before the cover is on everything works fine, but with the cover on the whole thing is just too tight. One solution might be to add groves to the gears so some 3mm ball bearings aka bbs can be added between the gears to keep everything rolling. Or maybe it just needs some some more space in the case. Play with those tolerances a bit.

I hope this project starts working 100%. Not that I particularly need a feeler gage, but 3D printed machines excite me. When people talk about the 3D printed gun project my take on it is: Okay, yes, gun, killing tool. Keep out of hands of children. Oogy-boogy. But there's a spring in there generating enough energy to hit a firing pin! If that's possible then what other tools can be reliably made? NASA is sending a 3D printer to space. Forget replacement panels, this opens up the possibility of real tools being made. I wish I had time to explore this more, I'd make a whole workshop of 3D printed tools.

By the way, I'm currently 4th in the MyMiniFactory contest. I'm losing to a chess set that you can't even tell what the pieces are supposed to represent. Listen, I don't mind if I lose, but I don't want a chess set to win that you can't even use for playing chess! Even if you've already downloaded my models, even if you don't have a 3D printer, download them again. I promise I'll make it worth your while.
Posted by 3dpprofessor at 3:36 AM