The story is I'm printing a replacement key that someone who had never done home 3D printing designed. Without thinking I just threw the STL he sent me into the printer instead of looking it over first. 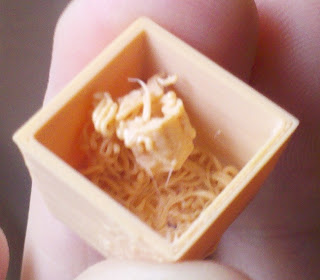 Never a good idea. The problem was the peg in the middle was actually raised off the build platform. So when it finally got to printing that peg it was already printing in thin air, attached to nothing. So I went back and forth with the designer a few times while I coached him on how to fix the object to make it more printable. Things like lowering the peg so it touches the bottom and adding support for the LED hole on the face so it won't mess up the bridging on the top of the key. Eventually he asked the question that should have been asked at the start:

"...does it make sense to print from the top down instead of the bottom up?"

In other words if I printed the model upside down of how it's going to be used with the face of the key on the print platform wouldn't that solve the peg problem? The answer of course is, well, yes it would, but I had already done all this work on making it printable the other way around. So I printed it both ways. 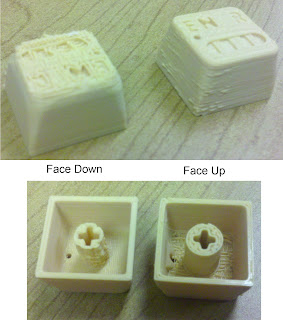 The point of this is you can save yourself some headache if you remember that you don't need to print things out in the same orientation they're going to be used.
Posted by 3dpprofessor at 6:15 AM