The last time I changed filament mid-print it was out of necessity, but this week I've been doing it for dramatic effect, and to great success. I've been accomplishing it due to Sailfish's excellent "Pause at ZPos" option, and some clever design

This was made for a buddy of mine who ran a half marathon. When I asked him how fast in a slip of the tongue he said "a minute 59" when he meant to say "an hour and 59 minutes". But it was too late, he gets the flash logo and his amazing time for all to see. (Glued a magnet to the back of it) 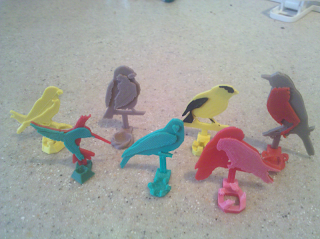 My mother collects eggs and has several that are very small. This presents two problems. First of all, finding good egg holders. Secondly, remembering which is which. So i made these. At first the layering was just for artistic effect and some of them look better in one color. but then I realized they might go well with changing filament, and sure enough they did. Up top from left to right, top to bottom, there's Canary, English Sparrow, Finch, Robin, Humming Bird, Parakeet, and Lovebirds. Below there's Banty (kind of a chicken), Dove, Lorikeet, Pigeon, Bob White, and Amazon Parrot. 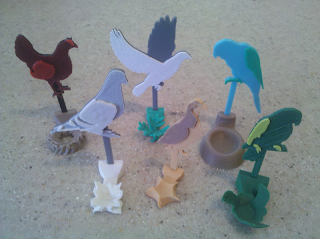 I do plan on offering these to the public, but not on Thingiverse. I will only offer the Humming Bird on Thingiverse. The rest will be available for sale (for only about a dollar each with a discount for the collections) on 3D Burrito, 3DLT, and anywhere else I'm motivated to try to maintain a collection. This will be my long term experiment and we'll see if it's a viable idea. But more on that later.
Posted by 3dpprofessor at 2:16 PM