The evolution of an idea

And that's the start of the process that ended in a set of modular toy robots. My designer sense went into overdrive and the idea of a simple robot went out the window. 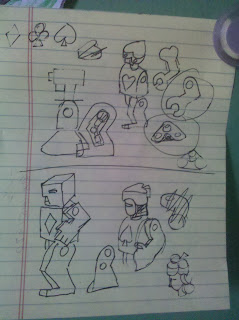 I made the prototype then drew out the sketch above. From there it was all in the 3D space as I iteratied designs by building the 4 sets I now have. That iterative process was, as it always is, awesome.

It was interesting the challenges that presented themselves during development. Like the clubbot, the shape of the club symbol on top of the head lent itself to curls on the clubbot's hair, so naturally it became the most matronly of the bunch. I wanted to communicate that by giving her dress-like legs but early designs layed down the legs like every other one of them which put a considerable gap between her legs that did not look good. When I realized I wanted to close the gap the solution became obvious. I needed to stand the legs up to print. There were no overhangs in the design to prevent it so I did. 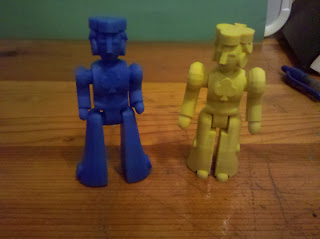 My favorite of the bunch turned out to be the spade. I felt the spade shaped head lent itself to a bob and from there decided to make something modern looking but lankey, like she's the youngest of the bunch and despite being the most advance is still figuring out her place. It's funny how little design choices lead to narratives that exist only in my head. 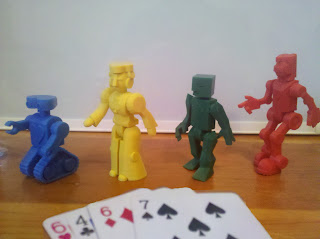 I know it's silly but I hope this glimpse into my mind as I was making these has been entertaining. I know I found it so at the time. Being able to create and iterate is a great blessing and I thank Makerbot for empowering me to do so, even for something as silly as this.