I've mentioned Wayne Losey's Modibot before (and subsequent rantings about using 3D printing for manufacture). The basic "Mo" Modibot is available for download on 3DBurrito. So how well does a model created for SLS printers to use as little material hold up when printing on a home 3D printer? 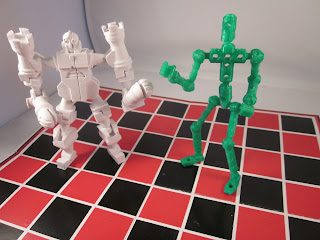 The final verdict is this is as challenging a print as I've ever done, and it's not perfect yet. I credit MakerWare and a well tuned Makerbot for getting it to work as much as I did, but I also credit the shortcomings of MakerWare for where it didn't work.

The first challenge was orienting the pieces for print. I wanted to, as much as possible, avoid supports on the balls and avoid completely supports in the concave joints. I decided to stand up the body and hips, but lay down the rest of the parts.

I started with an ABS print but with my known issue with abs and supports, particularly with spheres, it didn't work. In fact every piece had problems and basically fell apart. So I pulled out some PLA donated by Andrew Mazotta and gave that a shot. 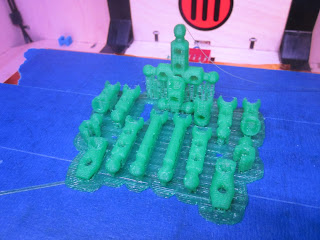 This time the pieces printed better. Cleanup of the supports was an expected pain. But assembly was too tight. Burs left over from the supports on the ball joints caused some problems that could be fixed with a little sanding, but it was clear that even when it did work the joints were being strained more than they should. In fact both ankles snapped upon assembly. It was pretty clear to me that increasing filament diameter one or two hundredths for a millimeter would fix it. Gosh it would be nice if MakerWare made that easy.

The final result held together just long enough to take a picture. It's possible that scaling it up an additional 20% would fix some of the thickness issues. Dialing in the filament diameter would fix others. And making a version lie Beco Blocks designed for home 3D printers would defiantly fix a lot of the problems. But over all I'd call this experiment "promising, but not completely successful."

I've actually been in contact with Wayne, the creator of the Modibot, and he's expressed interest in making this work, so expect this experiment to continue.
Posted by 3dpprofessor at 7:31 AM