So after my last adventures trying to get supports to work on round objects I appealed to the Makebot user's group and got back the response that I should probably focus on bridging and finding out the lowest temperature I can print at. So I did and I didn't take any good pictures of the process but I'm still fiddling at something between 200 and 210. But even at those temperatures ABS sags. So I decided to give PLA with a cooling fan a shot and... 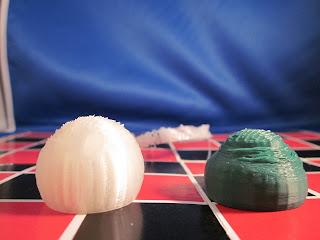 PLA with a cooling fan wins. It's not exactly the answer I wanted, but it really is true, PLA is better for accurate prints. I guess I need to get some more PLA on hand.

I still need to push the bridging tests and I'll probably have more on that later.
Posted by 3dpprofessor at 6:08 AM