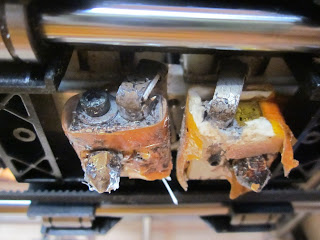 This is by far the most annoying bit of maintenance that the Makerbot needs. The ceramic tape is held on only by Kapton and frequently exposed to plastic from failed prints, which is what broke the right extruder's insulation this time. The left one also has problems in that the ceramic tape has broken down, turned brittle, and is flaking off into my prints. It wouldn't be so bad if it were easier to fix or if it was safe to continue printing without it, but this is a major thing that killed most of my Saturday morning.

Fixing it sucked a little less than last time now that I know what I'm doing, but it still required being very careful with the teeny-tiny little screws and needing to work with it hot to remove the nozzle. Lots of places this could go wrong, which fortunately didn't happen this time. 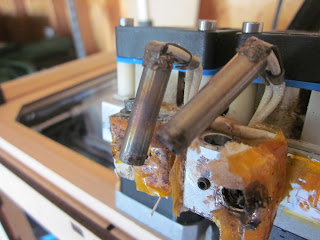 I noticed some discoloration of the heater elements. Hopefully that won't eventually become a problem. 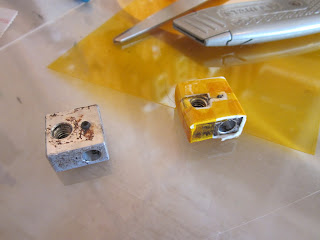 I decided to employ a method of using 2 long strips of Kapton tape to tightly bind the cut ceramic tape onto the block. Seemed to work pretty good. I just hope that doesn't create more failure points later on. I keep thinking I'd like to find something to put over the heater blocks to prevent exposure to failed prints, like foil tape or something. I may still experiment with that. 3Dwannabe on the google groups suggests a cloth-like ceramic tape that doesn't degrade, I'd love to hear more about that, too.

For now, the job is done and I'm printing again.