A second shot at a Modibot

After my last go Wayne Loosey actually contacted me and asked if I'd like to test a few accessories for modibots on my next go. Well that motivated me to give this another shot. 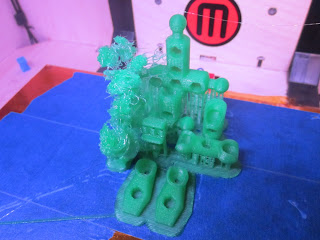 Did a couple of things different this time:

During assembly I only had 3 breaks, the left hip socket and two of the claws. The claws still had enough to hold on well but the hip socket only held on long enough to take some pictures.

Got to print the arm from one of the kickstarter kits. Used my white PLA for that. I call the middle one "lament of the cyborg".

The result was super posable and despite some roughness with PLA against PLA (it doesn't seem to slide like ABS and it definitely doesn't flex), after a little sanding to make the ball joints rounder it all fit almost perfectly. However in the arm accessory kit there was a new kind of joint, one that came around the ball on 2 sides instead of 3 and the result was the best joint of the bunch for hold, pose, and assembly. I would say to Wayne that all sockets need to have a split down the side separating it into two halves so it flexes during assembly. It doesn't need to be fully split like the wrist joint (or what I'm using as a wrist joint anyways) just a 2-3mm slit down the third side to add some flex is all. I would also say that increasing the joints to 130% would help. Not everything needs to be bigger, just the joints, tho the result might be a bit funny looking, I don't know.

I would also say to Makerbot why do I have to edit a text file to adjust filament diameter?! I'm gonna keep harping on this until they fix it. That is the only setting I feel like I need exposed.

In other news I'm very close to finishing Makerbot Project Blueprints, but things have taken a pause on my end while I wait for the proofers to check the last couple of chapters. I accidentally listed url wrong on the associated files making it impossible for them to proceed until I told them what it should have been. But we're past that bump now and hopefully finished with the 2nd draft quickly, then on to the final print layout. Exciting stuff.
Posted by 3dpprofessor at 6:11 PM