My sister makes her own soap. When I mentioned the properties of ABS and PLA, that PLA will disolve in a lye solution but ABS won't her eyes got big. She asked if ABS could be used to make a stamp for soap, since soap has lye in it until it hardens. I told her it should work. 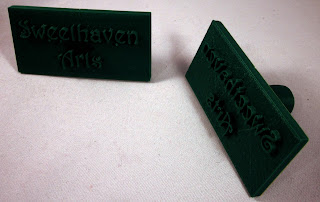 So I made her a stamp. I learned the hard way that stamps need to be in reverse before printing. But that's all right, I had some tolerance issues to fix after the first one as well.

So now I'm offering my expertise to the world on my Etsy store. There are a ton of soap makers on Etsy and I wont stop until every one of them can brand their wares. Who wants to. I'll be offering picture ones as well later.

Email ThisBlogThis!Share to TwitterShare to FacebookShare to Pinterest
Labels: shop