For my book (yes, got it in early) I had to explore MakerWare for the first time, for the sake of completeness. Before I've never really had any incentive to switch over and I still don't. I do like like that MakerWare allows you to plate multiple objects easily and I'm currently trying to see if it's slicer does a better job of making high quality prints or is faster with which so far has been promising. 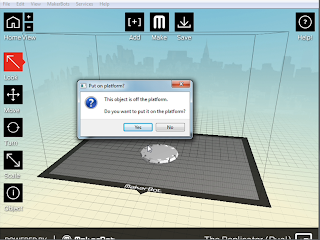 Overall I think I can say that MakerWare is it's not better or worse than ReplicatorG, which is kind of disappointing. Yes, there are things that MakerWare does better, but then there are still things that ReplicatorG does better, and that perplexes me. And the new version still doesn't address these things. Yes, improved rafts and supports are good, but I still need to edit a json file to change filament diameter, the silver bullet to good prints. I do not understand why this option wasn't put on the gui, nevermind that there isn't a more appealing way to change custom settings than editing a text file. Yes, I can do it, yes, json is pretty close to human readable, but for a piece of software that is obsessively trying to make 3D printing easy for the masses this seems like a pretty egregious oversight.

Oh, and be careful where you install MakerWare. It wiped out my ReplicatorG when I upgraded MakerWare because I accidentally put them in the same directory a while back. Silly me, I thought they'd use the same convention as everyone else and they don't. MakerWare installs by default in a directory called %programfiles%\makerbot, not %programfiles%\makerbot\makerware like everyone else. And their uninstall doesn't just remove the files it installed, it nukes the whole directory.

What do we get with the new version of MakerWare? Improved rafts, improved supports, and better infill. The hex fill doesn't bug out when set to 100% and that's good. But do we really need cat infill? The feature that would have convinced me to start using Makerware more would be if I could make those fancy support come out of the other extruder so I could start playing with PVA.

As for their new firmware I still do not know why they don't just license Sailfish. What they've added to the new firmware is only a percentage of what sailfish has been doing for a while already. I'm leaving my firmware right where it is.

EDIT: Just discovered something else strange: MakerWare generated files heat up both extruder heads the whole time which causes the unused extruder to leak. This is a big problem so I think I'll be avoiding MakerWare a little longer.

EDIT2: Apparently the uninstall problem and the dual heater problems came from upgrade. The old installer was the naughty one, not the current one. The old custom profiles are causing a conflict when upgraded. But delete those custom settings and that problem goes away. If MakerWare adds filament diameter to their main menu and if they add supports with the other material I will defiantly consider making the switch.