Silly me, I didn't depress the camera's button enough to actually take the picture of my first attempt at printing a full set. Pitty because it was glorious. Alternating rows of black and white pieces standing like little soldiers... except for the furthest right row. The row containing one pawn, rook, bishop, knight, and the king printed in black. In the middle of the print (in the middle of the night) something didn't stick and all the subsequent layers was nothing but spagetti and even took out the layer next to them in the oddest way: 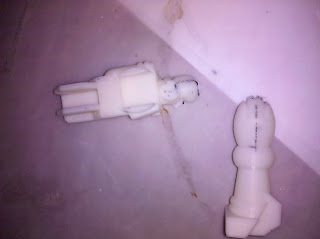 The dangling black filament was drug over the next row where it stuck. No way to fix that. Those pieces are just collateral damage. So in the end I've lost about 30% of the pieces I need. I'll do a correction print of the failed piece and then try a whole set again.

It's about a 4 hour print by the way but I'm doubling the output, so no effort is wasted.