Wrapping up the first week.

Now that I've gained some confidence in my Replicator's printing ability I had it running all day today. Unfortunately the attempts at making the last test pieces for my chess set ended in... 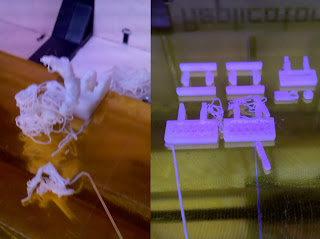 ...fail. But for some reason my elusive chess set was my only failures. Everything else worked out just fine.

I've been iterating a design for a clip to hold my Android while it films a time lapse.

For some reason the camera on my Android wants to make the black filament blue. The design itself needs another iteration, but that's the point of having a makerbot. I don't see it being much value to anyone else so it probably won't be up on Thingiverse.

Aside from that, and to avoid making this post too image heavy, I'll just link to my "I made one"s on thingiverse:
And that's it... for today. There were some prints last night that I somehow missed. I'll post a retrospective later. But for now the count is 38 total prints, 23 successes.