So the next step was to install Replicator G. I wanted to get as soon as I could into printing something cooler than the test prints. The install of Replicator G was... pretty good. Why is it trying to install in the My Documents folder? Why isn't there a shortcut on the desktop? The USB connection isn't exactly working as designed, but it seems to be connected. Yeah, I can jog the axis', it's connected. Let's do this thing.

So I decided to start small, a little decoder ring. Made the GCode, saved it to the memory card, and into the Replicator. 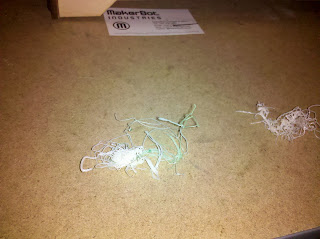 Eew, not quite successful. Neither were the second or third tries. 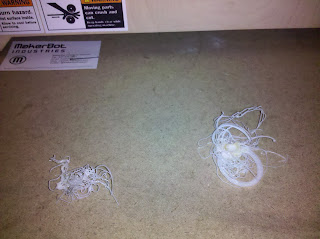 Maybe I missed something. Let me try one of those from the SD card... 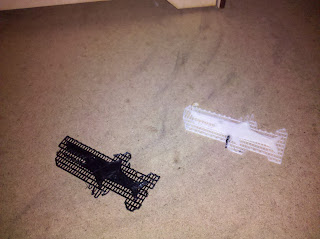 A few layers in the white shark started lifting off the build platform. Plus, it was a shark clip that I considered inferior to my own design. So I canceled that print and tried reskeining the decoder rings. 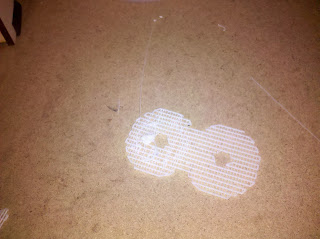 Well that's... better. At least it got the raft down before it lifted off the platform. Since it seems to like the sharks I'm gonna try my own mini-shark. 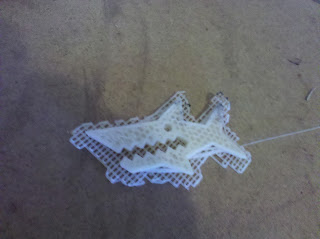 Well, it got a little further before lifting off the build platform. But this mini shark is bigger than the sharks I semi-printed out earlier. Did I somehow mess that up? Maybe my next print should be a calibration cube. And I think I read something about making adjustments so the plastic will stick to the platform. So it's time for a little lunch and a little planning before the next attempt.