As soon as the kids were in bed I queued up the Makerbot's unboxing tutorial videos and that Replicator was out of the box and assembled. 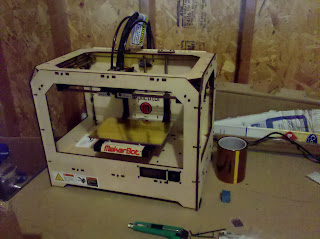 The process was amazingly smooth and simple and only took about 30 minutes, maybe less. Well done Makerbot on a user friendly experience. I was surprised at how many plastic parts were molded, not 3D printed. There's even a hidden message on one of the parts ("Keep it Awesome"), so they were definitely custom made for Makerbot. But they're not made on a Makerbot.
Then it was on to the first run experience or... FRE. Leveling, feeding filament, all pretty simple. Then the test print... but what to print. I wasn't thrilled about any of the options really, but having to choose something I picked the spiral box. However, it was 10 o'clock at night and I wasn't going to leave it running all night so I canceled the print only a couple of layers in. 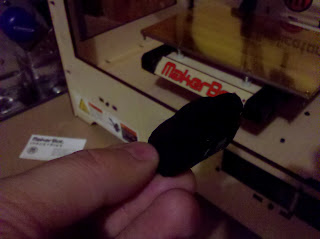 It's not much, but it seems to be working so far... or so I thought.


Since I'm me, I've got a little bit of critical feedback for Makerbot, in case any of them are listening: