Higher end printers take care of this a couple of different ways including "wiping" the nozzle on a special place to catch extra material to prime it before it becomes active and retracting the inactive head. Makerbots and other home 3D printers don't have the hardware or software for those features yet. It might be possible, however, to overcome some of these problems with some clever modeling. 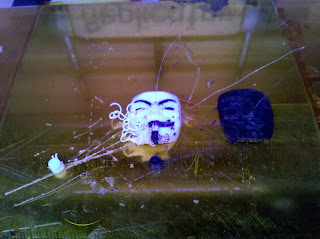 What led me to this discovery was an accident. I added a black column to the bottom of my Guy Fawkes hoping that it would print that part first. But the first time I tried it out I just came off printing chess sets and forgot to turn dual printing off. The result was two fold: wasted plastic and the best Guy Fawkes mask so far. Granted I had to clean off where the white air printed the beard and eyes, but that was minor. So I knew it was possible to get the effect I was looking for, I just had to figure out how. 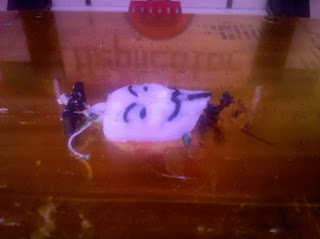 In the end I put a block of black on either side of the mask to catch the drooling white and prime the black. This yields pretty good results.Tho the black on the beard side tends not to be quite primed enough to stick so it has to be cleaned on that side, but no biggie.
So clever modeling can allow the overcoming of the shortcomings in dual printing until the software catches up.
Posted by 3dpprofessor at 6:49 AM