Everything you want, lubed with snake oil 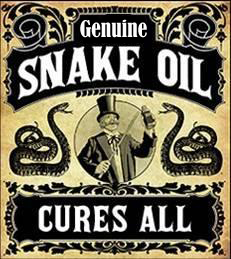 Step right up folks! See a 3D printer that can print in full color! Get prints so flawless that you don't even need to see them only $400! How about a 3D printer without the printer for a measly $75? Get the most of of your 3D printer with these special, never before seen plans! All this and more can be yours! Each order comes with a special snake oil to lube your rods with.

3D printing is definately the new hotness, but that also means it's also the new exploitable. 3D printing does some amazing stuff, it's true, but unless you dig a little deeper some savy predator will play up it's hype (excellent read, please follow this link if none of the others) to line their own pockets.

I'm not saying the people behind those examples I mentioned are necessarily bad people, mostly because I don't want to be sued. But at the very least they are selling themselves up considerably more than they probably should be. I feel it's a more than a little dishonest. 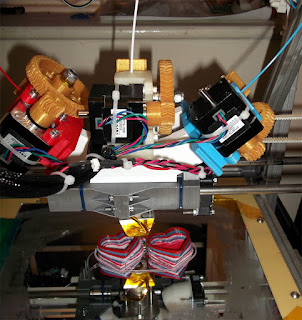 Let's examine BotObjects claim to full color prints mixed with 5 different colors of PLA. Can it work? Well, yes, RichRap kinda proved that (but, I mean, look at that thing). But anyone who's changed filament colors can tell you that it takes about a meter of extruded filament for the colors to completely clear out of the nozzle. They're not doing colored prints, they're changing the colors mid way so you can make striped prints. No full color Kianu from a BotObjects printer. Defantly not worth the price tag they're putting on it.

And while they mentioned PVA for support there's no example of that on their site. That's becauase while some have managed it, it's more fiddly than an Automated Build Platform.

In the past I've mentioned my feelings on the 3Doodler and just yesterday on the kickstarter for models you can download for free on Thingiverse.

On the flip side printrbot has been nothing but upfront about their attempts to bring price down, and I respect them. They're struggling but they're not giving up. I'm rooting for these guys.

The point when you see the worlds "3D" and "Print" to market something approach it with skepticism and doubt. Especially if they're confident. Double especially if you've never heard of them before. Because cheap home 3D printing is a new and exciting field and not anyone knows what they're doing. Don't give in to the hype and don't give in to the snake oil pitch.
Posted by 3dpprofessor at 6:32 AM