Thanks to Joseph Chiu I find myself in possession of a few 100 grams of PLA so, with my heated print bed out of commission until makerbot ships me the new part later this week I figure now is the time to try it out.

The difference with printing PLA is you want to print on blue painters tape,drop the extruder temperature from 235 to 185, open up the print area and get a fan blowing on nozzle head to cool the plastic as soon as it comes out. Easy, right? 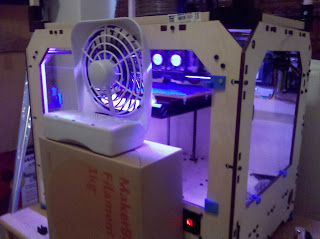 Actually, it's not that bad. But that's assuming all the horror stories I've heard about PLA being a pain to dial in aren't true. So first test print here we go... 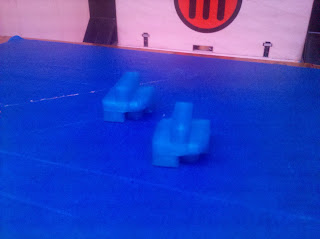 Woah, it worked. Just like that. (Sorry about the blue on blue.) Well, that was... easier than I thought. Let's try something a little bigger. Knowing I needed something better than a battery powered fan on a box I designed something to redirect my reversed fans on to the nozzle based on Lazy Man's fan guard (originally). 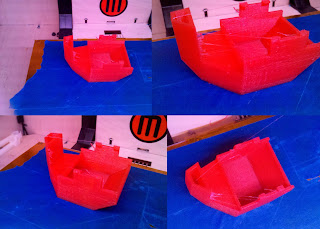 Could not get a good picture of this thing. Maybe PLA doesn't photograph well. But it prints just fine.

Maybe it's just the plastic that Joseph Chiu sent me but this is really running counter to all the warnings and horror stories I've been hearing about switching to PLA. I guess PLA isn't anything to worry about. Plus not having to wait for the heated build platform means it gets to printing a lot faster. While I still don't think it's appropriate to do a 100% switch, it's definitely got it's applications. I'll follow this up with some experimentations later. Is there any PLA related experiments you'd like to see run?
Posted by 3dpprofessor at 7:15 AM