Fixing the fan for good

ad·ven·ture adˈvenCHər - (N) 1. An unusual and exciting, typically hazardous, experience or activity. 2. When you set out to do something, everything goes wrong, but you survive and in the end you say "That was an adventure".


Had an adventure today upgrading the body fan on my replicator. Last time I moved the one fan closer to the outside. That was fine, but the fan itself was on the road to dead. I've oiled it to when it made noise, but this last time it just didn't take and I knew it was time to trash it. I had purchased two 12v fans with better bearings to replace the stock 24v that was in there because I heard you can wire them up in sequence to do the job and you can have an in and out flow of air. Now, when it comes to electronics most of the time I feel like I have no idea what I'm doing, but I have learned just enough that this made sense. In addition to the fans I printed out the part from the cooling fan redesign by drandolph. Those parts have been sitting on my desk awaiting this day. 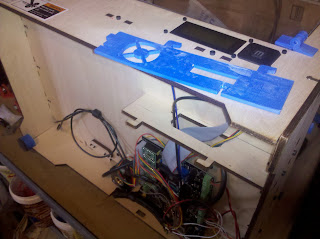 Step 1: Disassembly. Problem #1: Are those cables running through those parts? I'm going to have to remove cables from the motherboard, remember where they are, and put them back. I mean, I was already going to be doing a little bit of that with the fans, but there are, like, 4 cables there... Oh well, gotta do it. And fortunately Makerbot provided an excellent diagram that would come in handy later. 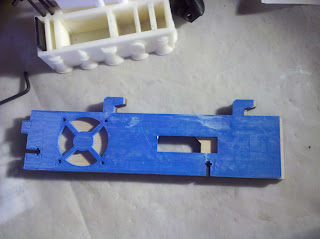 Problem 2: $%#&! ABS shrinkage. The printed part is considerably shorter than the original part it's replacing which means I can't insert it into the holes on the bottom cover. Were I disposed to print the part again scaling up by 1.02 usually fixes ABS shrinkage, but I can't print another one until I put my replicator back together. 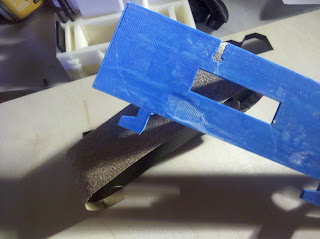 The solution I went with was using my 3D printed sanding block by Lochemage to modify the part. That fixed the problem of the slots, but the holes for the nuts are still too small. Fortunately I have a tolerance adjustment tool to fix that. 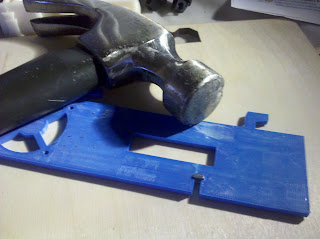 This may actually be better than the original since those nuts ain't falling out for nothing. Now the problems with the replacement part have been sorted out so the next thing to do was to pull out the old fan and wire in the new ones. 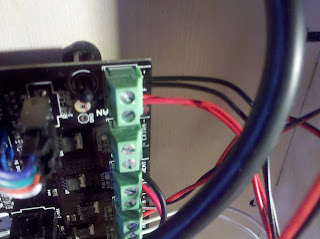 Easy enough. Just be sure to loosen the connections enough that you can find the hole for them when you want to reinsert the new leads.

At this point I ran into problem #4. The placement of the fan mount in the new part ended up being closer to the wall than I realized. The flow would not be as good as I wanted with the air not being much directed over the circuit board. I'm thinking now a total redesign is the only option, but since I can't print that replacement until I get this done, I have to press forward and hope I can still print when it's over.

Then came Problem #5. The bolt holes are too small and on top of that I can't find the nuts and bolts I bought for this sort of thing a while ago. So after an hour of frustrated searching I finally decided on an alternative. 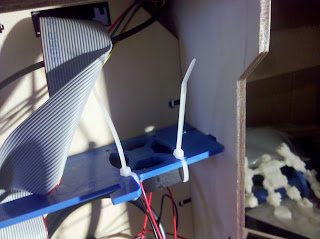 At this point I expected Ian McDiarmid to come out of the shadows and proclaim my journey to the dark side as complete. But the fans are in place so it's time to put everything back together. Turn it on, no sparks or smoke, but no LEDs either so I take the back off again, plug in the wire I missed, turn it on again, and one print test later... I'm back in business! 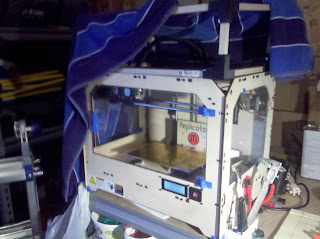 At this point I thought it would be worth listing the upgrades I've done to my Replicator so far. Hopefully this will be it for a while:

Which brings me to these: 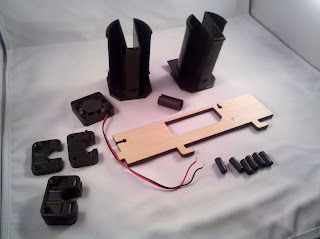 The flotsam of upgrades. The parts that were replaced by other parts, most of which were made by the replicator itself. This is the last I'll see of some of them, and that's pretty cool.
Posted by 3dpprofessor at 9:38 PM