Alright, enough drama. Let's get back to what where here for. Makerbotting.

My Replicator has been sitting quite for most of this week because the fan was getting too noisy. Others on the Makerbot forum have said the fan just needs a little oil, tho I've been warned that's a temporary fix and the fan will eventually need to be replaced. But I also want to take the opportunity to mod the fan in preparation for enclosing the build area. The idea is that the way the fan is positioned now it draws air in from the body to cool the electronics but I am working on making that air hot, so instead I should be drawing air from outside the case instead. This is the first major mod I'll have done and I'd be lying if I said I wasn't a bit apprehensive. 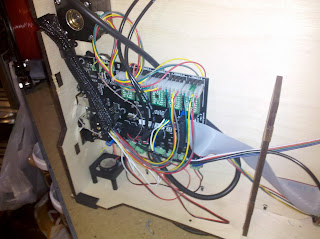 First I got the replicator on it's side and removed the covering to the electronics. There in the corner is the noisy little fan in question. Notice how the fan is held out on little extensions so it has space behind it to draw air from. I'm gonna get rid of that. But first... 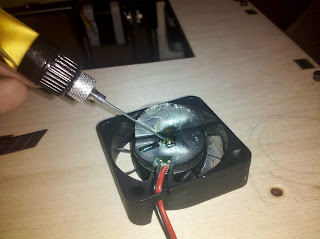 Peal back the sticker and add a couple drops of oil (from my wife's sewing machine maintenance kit). That should take care of the noise. Now to cut a hole in the case where the fan will be placed. 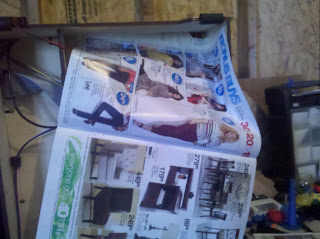 I needed to protect the electronics. A little masking tape and some newsprint for that. 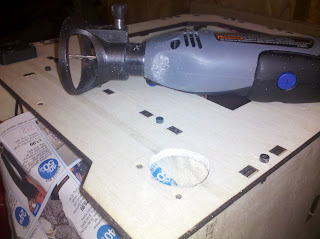 The first cut is the deepest. 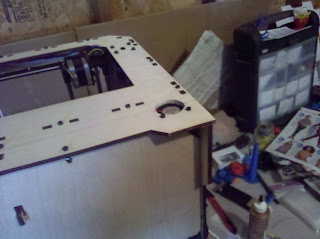 Fan mounted in place. Cover back on. And ready to print. The fan is now quietly drawing air from the outside of the case and all is well.

Now on to the enclosure before the cold of winter threatens my print quality.
Posted by 3dpprofessor at 10:35 PM