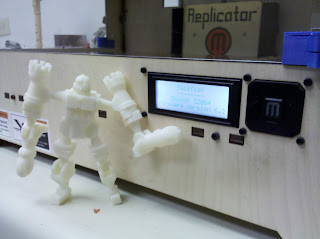 Sailfish is a firmware upgrade for Replicators and Thing-o-matics by the acceleration wizards Jetty and Dan Newman. And this is another reason why open source is more awesome.

It was an adventure that took a few days to sort out entirely. The hardest part of the initial setup instructions was the usual "Press reset a moment before pressing the Update button in RepG" which for me always turns into "Press the Update, count to 5, then press reset." I don't know why but my USB has always been slow.

Then came the experimentation. I used that as an excuse to print some apples for a print that I'll be telling you more about later. I quickly realized I could now print really, really fast and still have good looking apples, however only out of the right extruder. For some reason the left wasn't working. However, on the right I discovered that at 300mm/s travel speed my X-axis would occasionally slip, so I slowed it down to a still-blazing-fast 200mm/s. Then I printed at 60mm/s, that worked. So I pushed it to 120mm/s, that worked. So I went crazy and printed at 200mm/s print speed! And that still worked!And it looked good.
At 200mm/s the replicator just casually draws the prints as accurately as you like, however, without some slowing on the outer perimeter has a little ringing on one side. I'm told that it's due to vibration in the build platform. However it's actually less noticeable at higher speeds because it gets smoothed out.

But that little ringing aside my default print speed is now going to be 200mm/s! I have no way of expressing how unbelievably cool that is.

So since I'm printing so much faster I got a little bold with the layer heights. However at sub 100micrometers (0.1mm) My extruders seemed to give up. The tops end up a bit sparse, and I don't know why, with gaping holes. However adding more surface layers with the Fill/Solid Surface Thickness setting in Skeinforge, But then sometimes the whole thing just jams and it's looking like it's because my build platform is just a smidge too high and my nozzles can't get any plastic out, so I'll be looking into that. In fact that turned out to be the reason my left extruder stopped working. They weren't as level as I thought. So I fixed that and how I'm back to dual printing again, faster than ever.

This excites me. I'm sorry Makerbot, but your experimental 6.0 firmware with brand new MakerWare is still just a little green for my me. I'm sure it's fine for Replicator 2 owners, that's who it was made for, but Sailfish is solid out of the box and I'm very happy to be running it on my Replicator.

Plus there's the little things. Like lowering the print platforms after a cancel command has been sent. Or the new tunes. Or how the jog menu is a press-and-hold affair now. Or how menus wrap top-to-bottom now. My one suggestion would be to put the load/unload filament menu on the main menu and change the order so it's "unload" then "load" since that's the order that I tend to do it in. But I'm not complainin'. I'm sailfishin'.
Posted by 3dpprofessor at 10:02 PM