And then there's the retaliation

Okay, this is over the top. 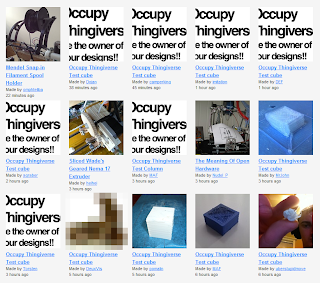 So Makerbot, in responding to pressure from investors and to be competitive with their direct rivals, has abandoned OpenSource to remain competitive in their new software and hardware. However, as I said yesterday, Thingiverse is still there and just as awesome as it always has been. And this is an important point. The Thingiverse Terms of Service have not changed.

But this morning, led by Open Hardware guru Josef Průša thingiverse is being bombarded with "Occupy Thingiverse" posts and reminders about the meaning of Open Hardware. Which is funny because I thought the meaning of Open Hardware was that you were giving up your right to complain about how others use it. Plus, as I said before, Thingiverse hasn't changed. Yes there is a provision in it's legal type that says that the license you choose is a secondary licence and that the first licence is that Thingiverse and it's operators have the right to do whatever they want with your uploaded designs like, oh, put them online for others to download. Which is the point of Thingiverse. Alright, the language is broad enough that they could sell it but does Josef really thing that Makerbot have gone so far over to the dark side that they're going to open a Thingiverse store and sell Non-Commercial licensed stuff? Apparently he does as well as a vocal minority that is filling Thingiverse with this stuff.

Remaining OpenSource would have been a bold move for Makerbot. And maybe right now it's the time for bold. They have a Goliath to slay, and we need to see them succeed. I'm afraid to say I'm going to be a shill on this one, I just wish I had something to upload across the picket line. Ride this out Makerbot. Ride this out, but a little apology to the OpenSource community would not be amiss either.
Posted by 3dpprofessor at 9:09 AM