You are likely to be eaten by a grue 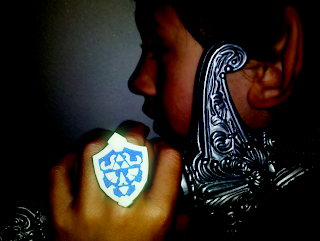 There's something giddy about playing with glow in the dark material. Just holding the spool and walking into the shadows and seeing it glow triggers something in the immature parts of my brain.

This glow in the dark filament has been a heck of an adventure. It didn't come on the spool which necessitated the development of a spare spool for the Replicator since, apparently, no one else has had this problem yet. That development process has been an adventure. First the arms were too long, then the back holder was the wrong dimensions. When I finally got it all together, the glowy filament loaded, and printed 2 rings. So far so good, and they glow, so that's cool. However after printing the second one the filament bunched up or the wheel didn't turn or something, I don't know. All I know is the filament holder ends fell out of the arms and I had filament all over the floor. What a twisty mess. So after fixing the filament ends, gluing them into place, and spending way to long rewinding the roll I discovered I miscalculated and wound the filament roll backwards on the spindle! Screw it, we'll work with it that way.

So there's still some work on my spindle spool and I've mounted the glow in the dark stuff on the side which is okay.
Posted by 3dpprofessor at 8:00 AM