As soon as my 7 year old son saw that I had red filament he immediately had the idea that I should print some teeth for a monster. Blue with red tips. I had him describe them to me. He drew me a picture and I had to explain to him that there was a 3rd dimension he needed to think about. So he described how it looked from above. They were a simple build in blender. Just a pyramid with a flange at the bottom to hold the glue. And they worked? 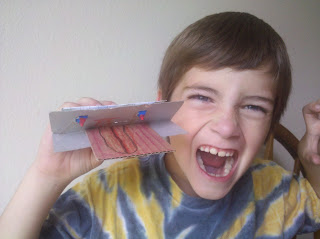 Of course they did. We ended up just painting the red on to simplify things.

Sure, I could have told him to just make them out of paper, but wheres the fun in that? This is his first 3D printed project and I wanted to encourage it. Besides, who knows what the next idea will be?