So yesterday I left my makerbot running the next iteration of my clip for my android while I went to work. Unwise I know, but I need to make money. And generally it would be fine until 15 minutes before I got home at which point one of my children saw a big flashing button on Daddy's cool make-stuff machine. This kicked off another print before the first one had been removed. The result was that the extruders were banged against the previous print rubbing little white... well I don't know what it is, I haven't learned all the parts of the extruder yet. I assume is some sort of insulation. And it was dusted all over the build platform along with badly skewed layers of a misguided print.
So after my initial panic subsided I checked the damage... it didn't actually look that bad. So I cleaned up the Replicator, re-leveled the platform to check that the heads were still aligned, they were just fine, and kicked off the next print to be sure everything was working.

I tell you what, Makerbot makes on sturdy machine. That thing just kept chugging away like nothing ever happened. Even when kids attack the Replicator takes it in stride. (Granted a better solution would be if it could sense when the head wasn't moving freely, but sensors are expensive so I won't fault them for keeping costs down and going with what works sans the occasional unexpected interference.)

Print report after the jump: 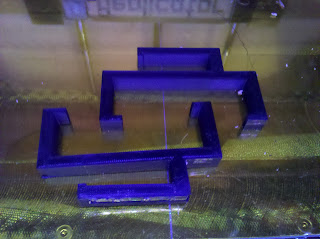 Next iteration of the Andoroid holding clip is successful despite being caught in a bad print. (White stuff visible in the picture.) This one works generally and I'm going to use it for a while.

Another attempt at printing my chess pieces failed with the new knight I'm working on. Gonna try it again today.

Universal Earbud Spooler. An absolutely clever product that you can actually buy from the creator if you don't have a 3D printer. 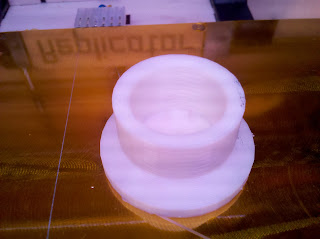 A foot for the ladder on the kid's swimming pool... that turned out too big. ProTip: When you get a caliper close it and find out which of the little tick marks is pointing to "0" so you know which one to read. 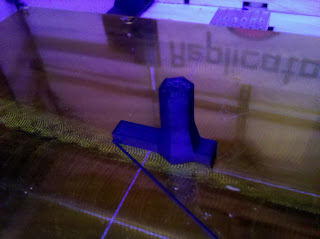 An 8mm alan wrench for my bike. It may still be to short, but this one is mostly to test if an ABS printed hex wrench has enough tensile strength to tighten a bolt so I don't have to buy a whole set, since they don't sell the 8mm wrenches alone. 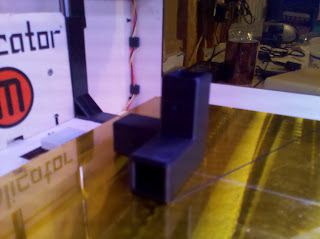 A part for a bigger project that I'll be reporting on later. This was actually printed a few days ago but somehow fell through the cracks.

It should be mentioned that except the part printed a few days ago all the parts shown after the android clip there were printed after the accident. I call that a triumph. Another round of applause to Makerbot and their massively durable machines.