My next print was so specific to my needs that I didn't think it would be worth posting it on Thingiverse, but it was actually the very first thing I tried modeling for 3D print even before the Chinese Chess set. However, not having a 3D printer until now I haven't had a chance to see if I managed to make it work. Well, I am happy to report that I did. Not only did it print: 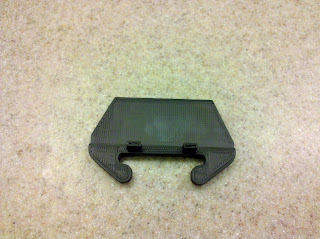 ...but it keeps my daughter's dresser drawer working perfectly. The score now is 8 prints, 2 successes.

However, the issue I was talking about on the last success, the first layer after the raft not sticking, is still a problem. Hopefully these pictures will show it for anyone who knows what I can do: 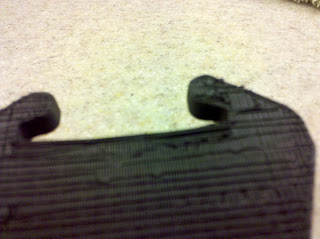 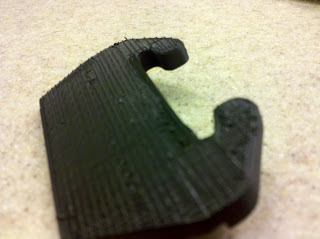 Click on the picture for more detail, but I'm afraid I just don't have a camera good enough to really capture the detail. The long lines going across are actually the top layer of the raft. They seem thinner than they should to me. And in the top picture particularly you can see where the fill  on the first layer doesn't quite collect with the outline of it, leaving a gap. I'd love to start printing chess sets but as long as this is a problem I don't know if I can.

I tried once more to reskien and reprint a pair of decoder rings and didn't even get past the first layer, but perhaps seeing how it laid down the raft will help someone in the know: 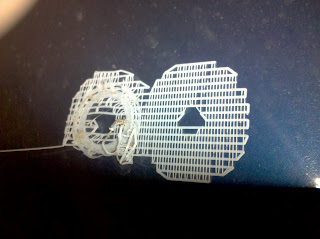 Which brings the score to 9 total, 2 successes.
Posted by 3dpprofessor at 8:24 PM