A night of trials, alot of prints

Last evening I think I finally cracked it! 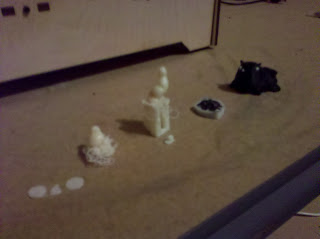 For the two failed kings there's no difference between them. I literally just reran the same build file that I ran (and that failed badly) the first time and it got much further before disengaging from the build platform and failing. This kinda worries me that my failures aren't consistent. The experiment was to increase the slicing thickness from 0.2mm to 0.3mm. At the same time I decreased the setting for the filament diameter from the default 1.83 to 1.78. One of those two, however, seems to have fixed my problems with the first layer! I want to believe it the diameter since that just makes more sense to me. After all, the filament actually is 1.75mm, so why won't I set it to 1.75? I may try that later. 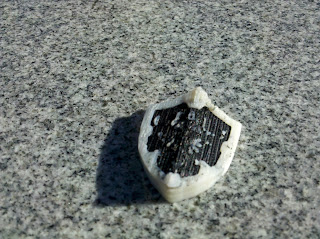 The dual extrusion print is a gift for my son's birthday. He wanted a Hylian shield from Zelda. Unfortunately there was a number of little problems. For one the small details didn't quite take. For another... well... 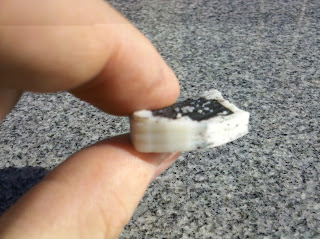 As the white extruder was doing it's thing the black extruder, safely out of the way, was oozing so that when it came over to do it's part it rubbed a couple mm of black off on the white layer it just printed. When it finished I rubbed it off the excess but some of it kinda melted together permanently to a dirty grey.

However, the good news is: 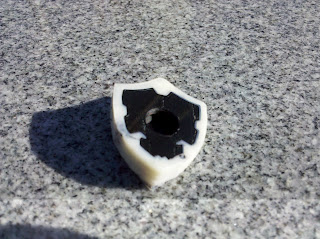 Look at that first layer. Hardly any gaps. (But you can really see the gray mixing in that shot too.)

Oh, and I got the eyeballs and tooth of my alot and glued them in.

19 prints. 5 successes. Actually, I'm counting the shield too. Sure it didn't turn out the way I wanted but that wasn't the makerbot's fault entirely. If I had gotten the detail right I would have gone with it.

So this sessions question: How do I stop the inactive extruder from oozing while it waits it's turn?