So apparently Gizmoto "...hope[s] that Larson decides to one day print these en masse and sell them on Etsy." What a great idea!

I've already toyed with the idea of selling my models through shapeways, but shapeways is kinda expensive for cheap little novelty items. Right now shapeways would want $40-$50 per side for the action chess set, and I'd only be getting about $2 of that. I don't think shapeways is the best way to go. So we're back to an etsy store. 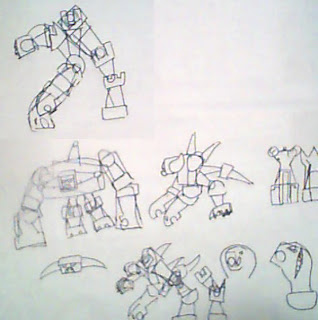 While the idea of the Action Chess set is cool, there are still some things that need to be worked out when I actually have a makerbot to do prototyping with. But while I'm waiting for my makerbot I can start on an opponent. User bull on thingiverse has already offered up a couple of ideas, but I don't like how in his designs the pieces aren't very clear in their disassembled state. That was a big thing for me when designing the the Action Figure Chess Set. I do already have my own idea about what the opponent will look like (picture on the right there). I plan to design it in TinkerCad again so that the style is consistent.

And I will upload the designs to thingiverse. Because I believe in openness. I believe the world is a better place if we all share.

...Except that now I'm trying to make some money off these. What if someone makes and sells a better design than I did? What if Matebro decides to make their own set and steal my idea. What if their idea is better or mass marketed? Maybe I should take out a patent. You know, just to protect me as a little guy. That way they'd have to pay me if they wanted to sell it and I could negotiate a percentage. Then I'd retire rich in a year or two. Yeah...

That entire last paragraph was hyperbole. I don't think this line of thinking is particularly productive. After all, as cool as this idea is is it cool enough to be stolen? Maybe. But probably not. Even with Gizmoto and commentators on Thingiverse inflating my ego my rule of thumb is that "Ideas are always 1/10 as cool to the rest of the word as they are in your head." After all, if all my ideas were as cool as I thought they were I would have won every makerbot contest I entered, cymonsgames.com would be bigger than facebook, and my wife would be beating off my harem with a stick. Full disclosure tho, my kids tend to be a pretty easy sell on how cool my ideas are.

I still gotta figure out how much to sell this for. Any suggestions?
Posted by 3dpprofessor at 8:12 AM