The air vent in my boy's room was broken. The drywall on one side was so shredded as to render any attempts to anchor in it useless. (The other side went into a stud, so no problems there.) I had the idea that I could print a custom joint that would attach the vent to the duct wall. 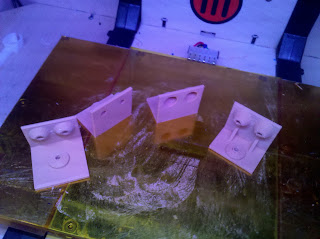 It took me 4 iterations before I got it right. Plan, design, print it out, check it against reality, realize something I needed to change, go back to blender to edit, print it out again. The final solution still required some glue against cracking, which I hope won't be a long term problem, but for now the boy's vent is holding in place.

I'm using the printer a little less lately since I'm down to one extruder. I've got the ceramic tape now. It's just taking me a little while to build up the courage to take my extruder apart to fix it. I understand I'm going to have to heat it up and working with a hot extruder isn't my idea of a good time. I know, I'm chicken, and I'll feel just fine once I manage it. This weekend, I promise. I wonder if makerbot fixed the exposed nature of that tape for the Rep2 or 2X?
Posted by 3dpprofessor at 10:26 AM