TARDIS Run is complete, and what a journey it's been. 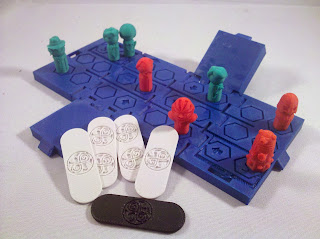 It started when I saw MakeALot's foldable TARDIS. I didn't like the way he decorated the outside so I decided to do my own. Only I wanted to do something a little more, and that's when the idea of a board game came to mind. So I determined that I could put a 3x8 board inside the box and I started to play with those limits.

There's a game with a similar sized board. It's this ancient Egyptian game called Senet which, aside from the board and some accessories we don't actually know how it was played. There were 4 paddles used that, best guess, were dropped and used to determine the moves. While I pondered on this I realized that paddles like that create an uneven distribution of moves, so what if instead of rolling, then choosing the piece that were reversed and you chose your piece and hoped that the roll would go in your favor. I'm not sure it's a satisfying mechanic, but it might have some possibility for those who like risk mitigation.

The game itself is somewhat abstract and could just as easily be made without the TARDIS theme that I started out with. But a version without the theme wouldn't get the same attention. On the other hand with the theme I pretty much lose the option of putting it up for sale on Etsy or Ponoko. Oh, it's still on Ponoko, but it's on Thingiverse too and I made a full(er) color version for Staples, tho dat sticker shock.... In fact the price seems to have gone up when I tried to make it more compact and use the space better, so apparently I have no idea what I'm doing when it comes to their full color paper 3D printers.

I would still like to make this available to those who don't have 3D printers, so if you'd like me to print one hit me up on MakeXYZ. Or you could have someone else print it. But if you send me just the TARDISBoard.stl it looks like the price comes to a little under $30 which seems fair to me and I'll make sure everything else gets in there
Posted by 3dpprofessor at 6:03 AM