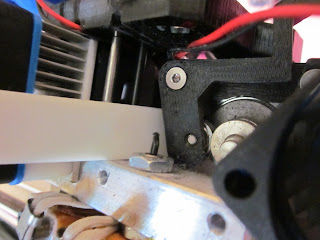 I have been unable to print with my right extruder (why is it always the right?) for a week because of this. The filament broke when I tried to remove it and I couldn't push it out with another filament. Fixing it was ridiculous. After taking apart the fan and drive block so I could get at the broken filament I heated up the hot end and tried grabbing it with needlenosed pliers but it wouldn't pull out. So I pushed it in, but I could only push so far before I had to get a toothpick to push it further so that the next time I loaded filament it could push it through..

Granted this is the first time something like this has happened to me, but this is like a paper jam that I had to remove 4 screws and loosen a 5th to fix. My mother would have had to call a repair man. A repair man to fix a paper jam!

I don't know, maybe newer 3D printers have fixed this problem. If not, maybe I've got a future in 3D printer repair.
Posted by 3dpprofessor at 6:07 PM