Give an engineer a toy

My day job is full of engineers working on awesome things. Recently they got a 3D printer and they've been using it for... everything. 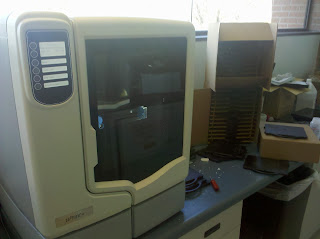 Here the printer is in it's natural environment. Next to it are the build plates. Theoretically they're one use only but they've found ways to extend that, tho it has been found to effect print quality introducing the same problems that I deal with all the time like curling.

But like I said before it's still a fused filament process with more-or-less the same tolerance constraints.

In some ways the things they’re using it for are silly. Nothing they couldn't do without, or fix with a box cutter and some cardboard, but they've got a 3D printer so they draw up a custom something that performs a single task in SolidWorks and print it out. They’re increasing efficiency by making the tools they need, tools that no one else will need so they could never buy them anywhere else. 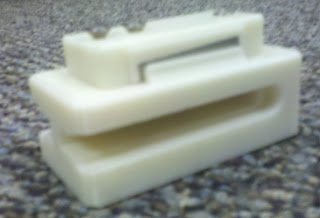 There was a problem with cables we needed fitting into the ports of a particular brand of laptop. The solution was to just cut a bit off a standard cable and it would fit. So instead of cutting hundreds of cables with a knife they whipped up something that would hold a razor blade in the perfect place so you could just slide the cable down the groove and cut the part off. Then a problem arose that the increased efficiency was causing strain on the operators thumb so they iterated the design to be more of a press guillotine. 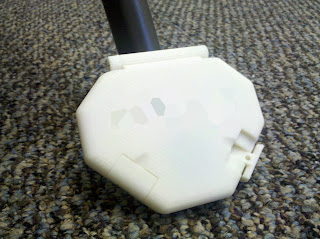 Part of a new process they’re developing involves a delicate custom part that ends up costing about $1000. So to prevent damage to this precious cargo in shipping a custom case was designed for it to keep it safe. 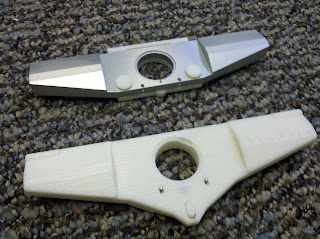 But perhaps the most exciting was when a machined part got replaced with a 3D printed part. They wanted to add a release mechanism to this metal part and first attempts included doing what they thought this machine was for, prototyping the mechanism, trying it out, hoping that they could translate that into a machinable part before sending it to the machine shop. However eventually someone came up with the bright idea that the release mechanism could be 3D printed into the part, embedded as it were, using the unique properties of 3D printing. Now this part is going to be used in the production machine straight off the 3D printer. The problem is solved and they didn't have to wait a week to get the part back from the machine shop. The plastic is strong enough for the job and the demand is low enough that this is a perfectly workable solution. Now they’re impressed that 3D printing isn't producing prototypes, it’s producing production quality parts faster and in some ways better than any other method.

3D printing. In some way it’s replacing traditional manufacturing but for the most part it is simply broadening the tools available and making things possible that weren’t before and easier than they’ve ever been. These aren’t the sort of things that wouldn’t do anyone any good on Thingiverse since no one else could use them, but in many ways that’s the coolest thing about 3D printing. There doesn’t need to be anyone else who needs them.
Posted by 3dpprofessor at 6:18 AM