When in doubt, go with the schematic

After repairing the nozzle I thought I was back to producing dual prints, only to discover that the right extruder was still producing fragile messed up prints. I was lucky to discover that the right extruder fan had finally given out entirely. So I got a couple of nice new ball bearing fans from Digikey, also received another new heated build platform cable from Makerbot, so I decided to install them both at the same time. 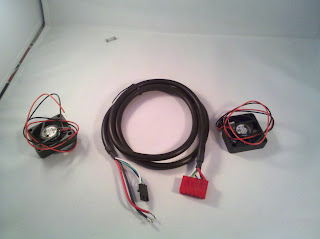 I thought installing the HBP cable would be the same as last time, only it wasn't. I printed out the Replicator Board schematic and taped it on the inside for future reference. 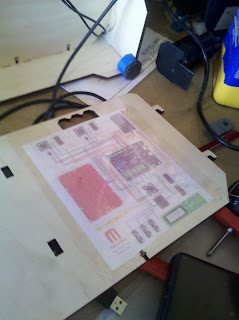 So I checked the schematic and discovered that the HBP cable had the connectors in backwards. I checked the picture I took last time and it was backwards from Makerbot in the first place. So I gave them a quick call and the advice I got was to follow the schematic. Well see if this time the new cable lasts a little longer. (I also put a little solder on the connectors to see if I could improve the connection somewhat as well, since I was going to solder the fan connectors.)

For the fans I discovered a problem: 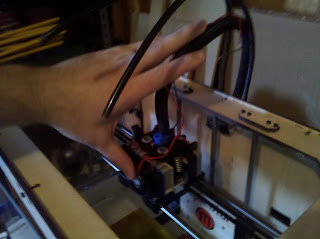 The new fan's cables aren't as long as the old ones were, so no stringing them around and plugging them in directly into the motherboard. So cut and slice it is. 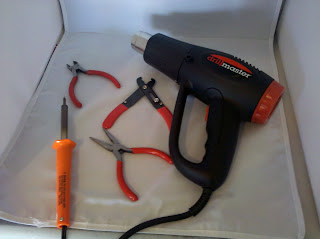 On the plus side I finally get to try out my new heat gun. (On a side note, is it normal for these to smoke the first time they're used?) 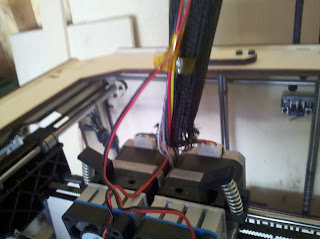 Did you know that little black cable above the extruder heads is just kind of a thing wrapped around the bundle of cables going out from the extruder heads? I didn't, but I do now. Made it easy to do the splicing where it wouldn't be immediately obvious.

Man, these new fans are great. They came on and I didn't even realize it until I looked. Not a sound. At this point every cheap fan from Makerbot has been replaced with more expensive ball bearing fan that should last much longer, so hopefully I won't have to do this ever again. Tomorrow I'll test to be sure right right extruder is back to working.

it sure feels like I do a lot of repairs to my makerbot. I wonder if replicator 2X owners have the same experience.
Posted by 3dpprofessor at 8:27 PM