I've been sitting on the plans for Chessbot Prime for a while now, just haven't taken the time to print it out to make sure it works. Now I have. 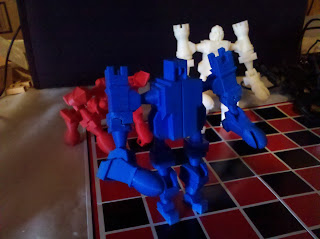 In addition I tried out the Wireframe Chess Set by ethanjurman. I modified the knight since that once clearly isn't going to like printing without supports. I knew the rest of it was going to be no walk in the part either, particularly because I was going to scale it down slightly, but I looked it over and it seemed like everything was about 2mm, so it may be a challenge but it should be okay. 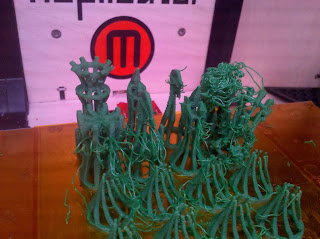 Ooh, except for that part before the ball on the pawns. Apparently that got a bit thin. Every single one failed. Still, I managed to get a few good pieces out of the experiment.

Rook turned out good, but only one of them worked. My modification to the knight managed to save one of them. Both bishops survived. Good sturdy design there. I'm surprised how well the bend in the base of the queen worked. Had I noticed it I would have tried to modify that into a gradual curve, but I didn't. I think the king lost to just bad luck; something wiggled, something didn't stick, dead king. But the pawns were universally destroyed. They just got too thin at one point.

I might try modifying the files and trying again one day, but I think more likely I'll just make my own. I discovered the wireframe tool in blender so maybe I'll just do that, but hopefully ethanjurman steps up and gives us a version that works.
Posted by 3dpprofessor at 7:04 AM

Email ThisBlogThis!Share to TwitterShare to FacebookShare to Pinterest
Labels: chess