@CymonsGames I was reading your blog post on printing with additional shells. Do more shells shorten or lengthen print times? 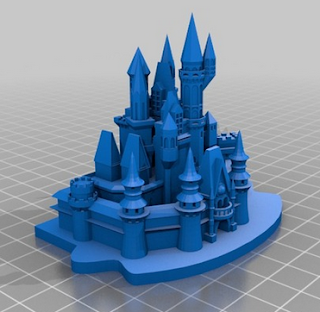 Fortunately I can find out without actually doing prints. The estimate function in ReplicatorG will give me something to compare.

The first subject I tested was Cinderella's Castle by SpaceCowboy850. I picked this one because I wanted something reasonably complex, but after I finished the tests I realized that they very small towers might actually fill in 100% with the loops. When that happens it won't put any more loops in that part adding no additional time. The second test subject was the Maltese Falcon by colinfizgig scaled down to be about the size of a chess piece. I picked this one because it's mostly round shape left lots of room for adding loops.

The procedure was simple. Slice the model with 0 extra shells and estimate the time, then slice the model for 1, then 2 then jump to 5 extra shells, estimating the time at each step and plot the results. Each pieces was made at 0.15mm layer height, 10% infill and 100mm/s feed rate with the altshell plug in turned on so the outside layer is printed slower than the rest of the layers. (That's more or less my default.) The results are as follows: 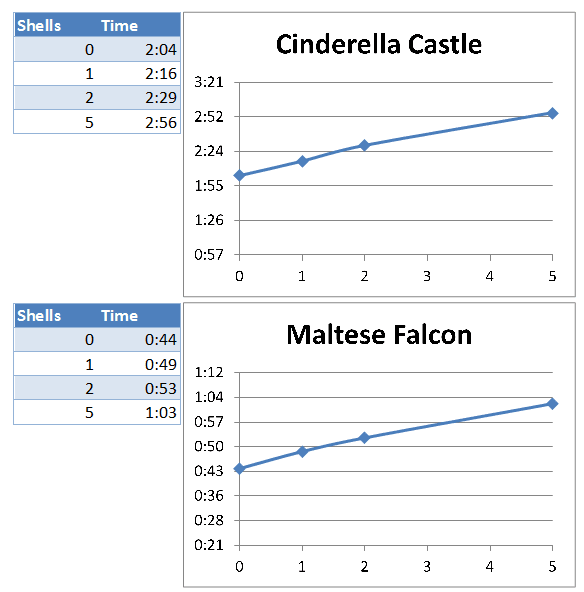 At first glance results seem pretty linear. The castle actually looks like it's making a slight drop, which can be explained by the towers not being able to take any more shells. But strangely enough the slope in the Maltese Falcon's line is also slightly less than linear. This of course makes sense after some thought since each shell is smaller than the last one. Numerically this breaks down to, with the Maltese Falcon, an increase of 5 minutes for the first additional shell, 4 minutes of the next, and decreasing as more shells are added, with the Castle it was an additional 14 minutes for the first additional shell, 13 for the next and decreasing. 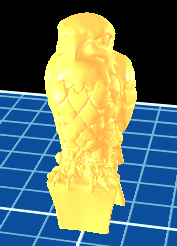 While 5 minutes doesn't seem like much the thing to keep in mind that if you're printing a whole chess set those additional shells are adding 5 minutes per piece.

After all this I decided I wanted to how much time it would take to print with 0 extra shells but 100% infill, which produces a solid chunk of plastic, and the results were surprising. Estimate said the 100% filled Falcon would take 53 minutes and the 100% filled castle would take 3 hours 11 minutes. I had to check twice but for the Falcon after 2 or 3 shells there's no difference, time wise, to just fill the falcon in 100% with 0 extra shells. Clearly this isn't a universal rule because the castle did not have a similar result. So perhaps it's only small, solid, mostly round shapes? Either way if you're thinking you need to add more than 3 shells estimate it against 0 shells and 100% infill and determine if you can spare the plastic.

This was an interesting experiment, so thank you TheNewHobbiest for starting me on this journey. Knowing this will definitely change the way I print in the future. Probably. Maybe.

(PS. Updated the resolution comparison with a graph because I had excel open. Yup, it's a curve. You're welcome.)
Posted by 3dpprofessor at 6:15 AM