Fixing the crack by poking holes

Theory: Increasing the plastic around corners will strengthen adhesion.

I've proven that more plastic does decrease cracks, but adding extra shells adds plastic everywhere. It would be nice if I could control the amount of plastic just be around the corners. If this works I may try writing a skienforge plugin for this purpose.

I recently needed to make a door wedge. I thought the first one was too small so I scaled it up, by too much apparently. The scaled up print cracked badly so I decided this would be the perfect opportunity to try the holes. The holes are 0.1mm diameter 3 face cylendars arranged in a honeycomb pattern and brought to within .5mm of the various walls. The measurements were all approximate but next time I think I can do something much more exact. 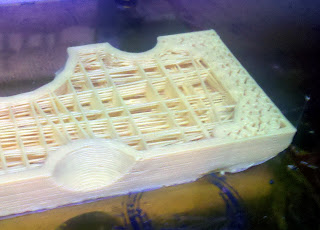 You can see as it prints the additional plastic. I don't think I put the hole close enough together which resulted in some air. But it seems to have been enough. 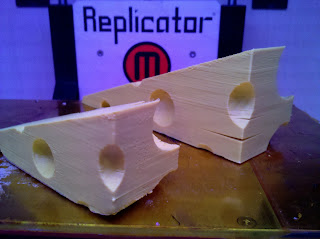 Cracked in the background, fixed in the foreground. There was some curling on the new one, plus the new was slightly smaller than the extra large one that cracked because I didn't think I needed two extra large ones. They're both going to end up junked anyways. So the results are inconclusive but promising. It definitely got past what could and should have cracked. Obviously this wont work with small objects that don't have any extra internal surfaces to build up, but there's promise here.
Posted by 3dpprofessor at 4:12 PM