Merry Christmas to all. While getting ready for my holiday trip I found an old notebook where I brainstormed ideas for my chessbot. Here's the earliest sketch of what eventually became my winning entry. 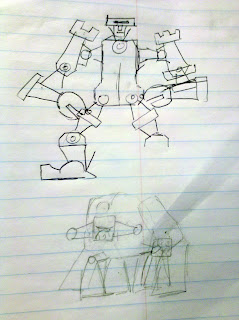 I originally was playing with the idea of using a pawn for the head. I wanted to get a robocop vibe, but I couldn't resolve the proportions of the face. Then when I did a count of the pawns I realized I had to just throw that idea out.

There is also penciled in the first idea for what became the opponent set. At this point I'm not sure if that sketch was made after I won the contest or when I drew the first one. I'd like to say I was working on the opponent way back when, but I just don't remember.
Posted by 3dpprofessor at 6:10 PM