How not do dehydrate your filament 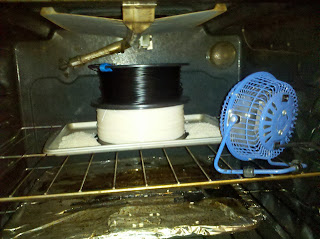 I got a few rolls of filament, one from Protoparadigm (black) one from Makerbot (white) and both pre-swollen. 1.88m diameter plus or minus. Way too thick to use with my existing filament if I want to use both extruders at once to double output. The difference would mean the pieces from one would mate too tight or the other too loose. And since dehydrating in my oven worked so well last time I thought I'd give it another try. Only this time I would leave the oven a crack like advised, put my heavy duty mini metal fan that I've used for years in there to increase the air flow, and do the whole spool at once. In fact, I'd do both spools.

Not only did I not decrease the filament diameter by any significant amount, I warped my spools and broke my fan. Maybe I had the temperature a smidge too high (but I doubt it). Maybe doing the whole spool at once was too much. Maybe doing them on the spool was a bad idea (not enough air flow between). But I'll be darned if I was going to try to wind those things back up afterwards. Either way this was a bad idea.

Hopefully, probably, the spools are still usable. I'll find out this weekend when I set up to print some more chess sets.
Posted by 3dpprofessor at 2:20 PM