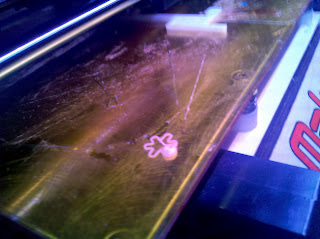 Every time a print starts the first thing the makerbot does is lay down a blob of filament as an "anchor" point, then draws a line over to the print. Then it pauses while it calculates the next step, still extruding filament which makes another blob, then starts the print. So there's this long string of filament you have to remove as well as a thick blob you have to cut off of every print. The reasoning for this is to prime the extruder and make sure you're sticking to the base. However if I do multiple separate parts in the same print whatever part it doesn't start printing first doesn't have the advantage of this procedure and still prints just fine. I don't know why it took me so long to see this as a problem.

Most of this short adventure is documented on the makerbot user's google group including the resulting start.gcode edits.

I started out thinking that it needed to print something at the start so I would have it do a little logo that I could give away or at the very least not have a huge pile in my discard bucket. I considered a heart or smiley but in the end went with an asterisk since that's my logo for Cymon's Games. So I made a simple model, had ReplicatorG skien it, and copy/pasted the printing commands for the outline of the first layer from the generated gcode into my start.gcode. The result was... well, I didn't suppress the blob at the beginning so it didn't look much like an asterisk.

Then I realized, little logo coolness aside why did I need it to print anything. Again, multiple parts don't need it. So with my new found knowledge of gcode commands I simply inserted a single command that told it not to draw the line after it makes the blob. The result was exactly what I wanted. Pump primed and only a little plastic lost. Mission complete.

EDIT-Maybe not. Just did a print where I think I could have really benifited from a little more pre-extrusion. A lot of small details, report coming up.
Posted by 3dpprofessor at 8:30 AM