Dang it, first layer. You had one job... 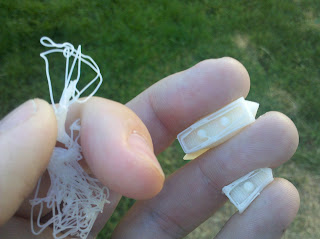 Been having trouble with ring bases sticking when printing, but I assumed it was an issue with filament diameter with the new plastic. Then I test printed the pieces for a lego compatable game I made and... still no sticky. Now I think it's bad geometry because part of all these prints sticks okay. Either that or I haven't been raising the print bed temp. Either that or it's an acceleration thing. Either that or... I've got some fiddling to do.

I've had some other problems that the makerbot user google group has been great in giving me some ideas to try. My strange alignment issues have gotten fixed. I'm still working on the strange ridges I'm seeing. There are no hard and fast solutions yet, but I've learned more GCode and gotten braver in experimenting with it. However, this counter points the argument that Makerbots are still far from a consumer device. You can have a cheap 3D printer, but you're still going to be doing some heavy lifting. It's better than it's ever been, but it's not "there" yet.
Posted by 3dpprofessor at 8:57 AM