Continuing to push the detail

A bit more fiddling this weekend to get more detail as fast as possible using pocket tactics pieces. 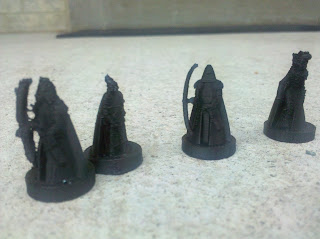 From left to right, the archer and shield maden were printed at the same time with a 0.1mm layer height and the skin plugin on to double the exterior layers, really pushing it. The hope was that providing two prints at once would allow the layers more time to cool. (The cool plug in is also on.) The result was not what I would call a success.

In the middle I printed just the archer with my "safe" settings: No skin plug in, 60mm/s 0.2mm layer height. Really good.

But I didn't want to give up on the skin plugin, so I tried again. On the right has a layer height of 0.4mm, the skin plugin on doubling it. So on the perimeter it's the same as the previous print. It's hard to tell in the picture but the print is crap. Better than the first one, but crap overall.

Alright, one more test. No skin plug in, a 0.1mm layer height. The print would take twice as long. And the result: 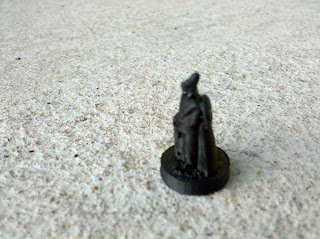 Really good. A little bit of sloppyness starting at the shoulders where it all gets narrow but really good overall. Mind the detail difference is only notable under a magnifying glass. I'd like to try something with a textured exterior. But overall this works.

So what do I conclude from this? Basically skin plugin + small detail = failure. I wish there was some way to get the skin plugin to work. I suspect the problem is in how it doubles the layers. It doesn't allow the cooling to happen resulting in every other perimeter layer being "squished". Jetty has an idea to try so maybe this will have a part 3... to be continued.
Posted by 3dpprofessor at 4:01 PM