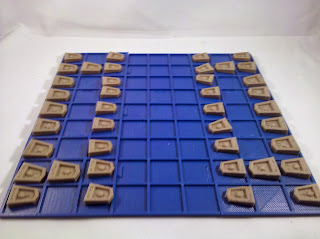 Shogi is a cool game that I've always admired. If you capture an opponent piece you can add it to your army on your turn. How cool is that! However the fact that traditional sets are written with Japanese characters make it hard for new players to be willing to climb the learning curve. So I made this set with little icons that describe the movement of the pieces.

If you print the set at 80% size it makes a nice little travel set, tho the names of the pieces may become a bit difficult to read.

I decided to put the model for this set for sale on Ponoko. If you'd like to support me you can buy this model and print your own Shogi set and finally play this ancient chess variant.
Posted by 3dpprofessor at 3:24 PM