There's a sort of make-it-yourself movement among board gamers called Print 'n Play. Basically, instead of getting a box of cards and a board you get a PDF for the board and cards that you print out, cut out, and play yourself. It saves on manufacturing costs so you can get the games cheaper. And of course 3D printing can make the results even cooler. (For example see anything by DutchMogul on Thingiverse.) 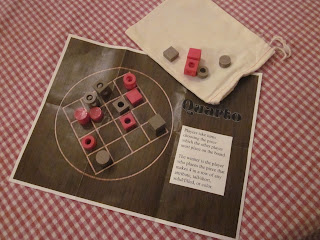 I decided to make for myself a version of the game Quarto. The pieces were simple enough to model in Tinkercad. The board was a 10 minute photoshop job, but now that I've seen this one I may have to color the bag and throw the board away.

Probably not going to release these pieces for download since this is a commercial game. But it's a simple enough idea that anyone could do it if they wanted to.
Posted by 3dpprofessor at 4:39 PM