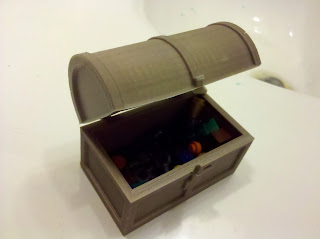 In case you're not following my profile on Thingiverse, I uploaded a minor remix (because we're not calling them derivatives any more I guess) this morning for a treasure chest with a lid. The modification I made really was extremely minor, just some vertex editing in Blender, but I wanted to use this excuse to talk about Heroica, since that's what the chest was printed for and since Heroica has suffered an ignominious fate!

I'm sure some of my audience on this blog also likes playing board games. If you're a fan of board games you'll love Heroica. If you're a fan of RPGs and want to introduce others to RPGs then use Heroica because it's everything I love about RPGs without any of the things I hate about RPGs. In other words it has all the customization and fun of an RPG without drawn out conflict resolution or silly math. (Hey, I loves me some math, but some RPG math gets pretty ridiculous.) We just discovered it this Christmas with the Fortaan set and my two boys aged 9 and 8 and my daughter aged 6 were totally taken by it. I'll admit I was pretty impressed myself.

After playing one game we put it away and my eldest son pulled out his regular Lego set and started building the his own game with his Star Wars minis. So I pulled it out again and we played some more exhausting all the scenarios the game already came with. That was no problem because he created his own scenarios on the spot. They're all so taken with the game we've had to take it away so that they'll get ready for school in the morning. 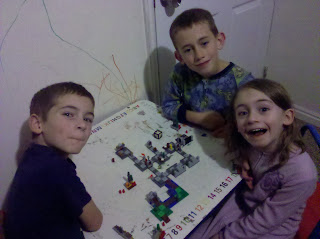 My only critism of Heroica (besides them canceling it) is that all the characters are ostensibly male. I know there are female lego micro figures and since the characters are duplicated between Heroica sets maybe they could use a female barbarian, druid or wizard in some of the expansions. I know my daughter would prefer that.

Like all Lego games the base rules are a bit sparse. We've made a few of our own house rules that we think improves the game:


Heroica is not just a game, but it's a solid game system I would like to see applied to different themes, not just a Tolken inspired adventure. I'd like to see a western Heroica or scifi. I'd suggest Firefly or Doctor who, but I'm a bit indie. I suppose I could apply it's rules to a non-Lego game, but I want to give Lego credit where it's due. Their game is great and I want more of it. Please Lego, don't kill Heroica. At least we've still got the web game. I've tried writing Lego. If any of you know a more effective way to get their attention, let me know.
Posted by 3dpprofessor at 6:43 PM