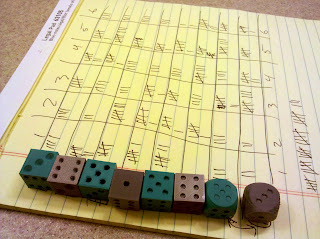 So last time I explored testing if 3D printed dice can be considered balanced and the result was a resounding... oh, there's a proper way of doing this. It's called the Pearson's chi-square test. The basic idea is roll the dice 5 times the number of sides you have, tally up the number of times each side shows up, then subtract 5 (the expected value) from each tally, square the difference and add the squares up. If the number you get is over 55 then your dice is unbalanced. So I printed up a couple of dice, some with 2 shells and 20% infill, some solid, dumped them through the 5 minute dice tower over and over. Then I tallied the results and did some math. Here are the final results in no particular order:


Which means according to the Pearson's chi-square test any of these 3D printed dice are sufficiently balanced to use. And this thing is supposed to have only a 5% failure rate, so there you go. 3D printed dice can be used as dice.

Do I believe it? It seems to me that to get a score of 55 a dice has to be severely imbalanced, so I look at this data as a scale of balance. Which of these dice are most balanced? Well according to my results the list in order, from most balanced to least, is: Cone Holes Infill, Worthless Solid, Worthless Infill, Customized Infill, Dual Extrusion, Balanced Infill, Normal Infill, Cone Holes Solid, Customized Solid, Balanced Solid, Normal Solid.

It pleases me that the so called "Worthless" die ranked so highly regardless of fill. But it bothers me that so many of the solid dice ended up ranked lower because I really like the way they feel. Perhaps the lighter weight allows them to bounce and explore the space better. Which, again, explains why the worthless dice is not so worthless as it has a forced empty center. Many of the highest ranking designs are sharp cornered, but so is the lowest ranked, so rounded or sharp corners don't seem to matter. That speaks well for the chances my hollow die (which I didn't include in this test because I was expecting the rounded corners to be bad). The Customized dice also did fairly well with infill, so that opens up all sorts of options.

Now that these experiments are done I'll be selling them if you're interested in having some.

Conclusion: According to the Pearson's chi-square test a 3D printed dice is sufficiently balanced, but it seems that dice with low infill are more balanced. Who'd have thunk?
Posted by 3dpprofessor at 11:35 AM